Kameron Hurley is the author of the novels God’s War, Infidel, and Rapture (out February 26th in the UK) a science-fantasy noir series which earned her the Sydney J. Bounds Award for Best Newcomer and the Kitschy Award for Best Debut Novel. She has won the Hugo Award (twice), and been a finalist for the Nebula Award, the Clarke Award, the Locus Award, and the BSFA Award for Best Novel. Her most recent novel is the subversive epic fantasy The Mirror Empire. The sequel, Empire Ascendant, will be out in October 2015. She writes regularly for Locus Magazine and publishes personal essays at kameronhurley.com.

Seriously, I write marketing and advertising copy for living, so I’ve got eight hours a day of that, then I come home and write some more – fiction this time. I write all weekend. I write as a hobby. I write for money. I write for fun. I have always written.

Ebooks or Traditional?
Both. I think it’s important for writers to take advantage of all the opportunities they have out there – this is a great time for writers to explore all of their options. I have traditionally published work as well as work I’ve put up at various online platforms myself. Multiple income streams really helps. If you completely rely on Amazon and one day they decide to change royalties from 70% to 20%, you lose your entire income. If you rely on one publisher that goes bankrupt, your books could all become caught up in some horrible bankruptcy nightmare, and there goes your entire income. But if you have three or four traditional publishers, and you sell work digitally on three or four online platforms and from your website, you’re less likely to get taken out by that kind of disaster.

What is the best piece of writing advice you’ve ever received?
Don’t write every day. Which pretty much goes against a lot of the advice you see from other writers. Many find that if they stop writing every day, it’s difficult to get back into it. But it’s not like that for me. In part, I think, because I write as part of my day job, so it’s a regular thing. Just… not for fiction.

It’s taken me a long time to realize that I’m not the sort of writer who can happily sit down and write a thousand words over a couple hours and be done for the day. I hate it. I’d rather have six or eight or 10 hours to myself and knock out 5,000 or 8,000 or 10,000 words at a stretch. It turns out there’s even a term for it – “binge writer.” That’s me.

I encourage writers to try all sorts of different types of writing – before work, after work, at lunchtime, in marathon sessions on a Saturday – just to figure out how it works for them.

What aspects of writing to do you find the most tricky?
All of them. Mostly plot, though. It’s the part of writing that comes the least easily to me, and I work very hard at getting it right.

These are romantic books? Clearly I have a very different idea of what constitutes romance.

Which of your previous works are you most proud of, and are there any that you would like to forget about?
I’m pretty pleased with the sequels to my first novel, GOD’S WAR. INFIDEL, the second book, and RAPTURE, the third book (out February 26th in the UK), were a ton of fun to write. Narratively, they are much stronger, much cleaner, and keep the adventure and madness coming in great big doses. There’s more bug magic, more toxic deserts, more trash-talking heroines.

Who has been your favourite character from your book/series and why?Nyx from the God’s War trilogy will always be the horrible monster I want to know but never hang out with. She is persistent, hard-headed, bloody-minded. She will get something done even if it means destroying everything around her. Including you.

Is there one subject you would never write about as an author?
I won’t write about female characters who are sexually assaulted. There’s plenty of fiction that does it. I choose not to. That’s the great thing about being a writer: you can choose which narratives you want to contribute to, and which you don’t. We all have those things that happen in books that make us go “Nope nope nope.” That’s it for me.

Now, if I do write during the week, it’s on stuff that I’m not contractually bound to finish, and I don’t have to feel guilty about working on it.

Do you have any particular preparations for warming up the writer-brain, or get stuck straight in?
Writing is a job, for me. When you get to work at 8am at your day job and your day job is writing, well… you come to work and you write. Having a day job in marketing and advertising actually trained me really well on how to hit deadlines and write to spec. No one ever comes to work where their job is stocking vending machines and says, “Well, I really need to warm up my stocking-vending-machines brain.” They just get to work.

Who would play you in your biopic?
Kate Winslet. We both wear the same size shoes. This is important. Trust me. 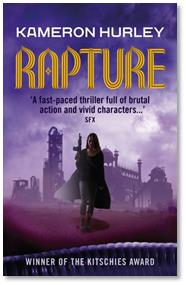 Out on 26th Feb from Ebury Books

Nyx is back, alongside the bel dame sisterhood of assassins.

Although the centuries-long war is over, civil unrest is rife, and the fate of one kidnapped politician could be the catalyst for a bloody regime change.

With aliens in the sky and a hint of revolution in the air, Nyx and her team of mutant shape-shifters, torturers and bio-tech magicians have a new mission: save a life to save a country.

‘A fast paced thriller … we’ll be surprised if you find a ballsier and more fun SF novel this year.’ SFX
‘God’s War is so good.’ Alison Flood, The Guardian
‘You are going to love Nyx… She makes Hans Solo look like a boy scout.’ i09
‘Infidel is a well thought-out and intelligent novel, which asks a number of questions and refuses to present easy answers.’ SFF Chronicles
‘Readers who enjoyed God’s War will not be disappointed by Infidel… I highly recommend it.’ Strange Horizons Magazine