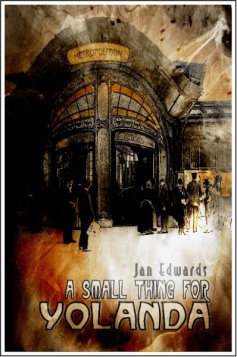 The Métro Murder is one of the most famous unsolved crimes of the 1930s. Who was Laetitia Toureaux? What were her links within the murky world of spies and secret political movements? All of those things remain shrouded in mystery, despite the fact that her movements on her final day are well documented. How was she stabbed to death in an apparently empty Métro carriage? And by whom? A Small Thing for Yolanda offers one potential solution.

Available from all good high street and online booksellers

Also available in digi format from most online sources including:

Nick Circovik online review   “Using a mysterious unsolved murder on the Paris Metro in pre-Second World War Paris as its springboard, I found Jan Edwards‘ A Small Thing for Yolanda to be a pacey  page turner, distilling a heady, darkly romantic perfume of spydom, sex and supernatural savagery during its relatively short length. What’s not to like!?”