In the interests of research as I write the Bunch Courtney Investigations I do acquire a fair number of books. 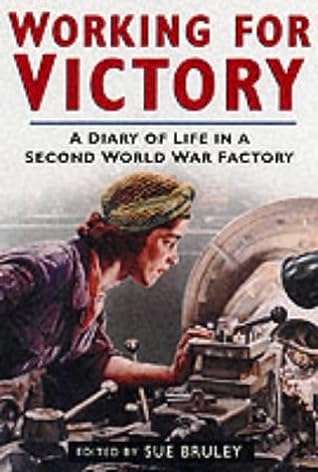 Yes, I can look up small points things up online as I go along but reading around the subject often highlights aspects that I had not previously considered.

Today I received a copy of Working for Victory : a diary of life in a second world war factory – edited by Sue Bruley. This is a diary of a munitions worker in Croydon during WW2.

Listed Dead : Bunch Courtney Investigation #3 is on the way, but my next work in progress, the tentatively titled In Cases of Murder : BCI #4, involves a factory setting.

In common with many people of that era my mother seldom (barely) spoke of her war work in a munitions factory as a fuse setter during that time, in Croydon… The crossing of streams was in no way intentional, but searching information for Bunch Courtney and finding this book was… Spooky.

Now I don’t expect my mother to be mentioned in this book, and I have no way of knowing if it is even covering the same factory, but it will at least give me a good working knowledge of the work and ethos of those places.

Partly as research for In Cases of Murder, but also as a means of understanding just what my mother and aunt both experienced in that time, I am looking forward to reading this one.

It will be an interesting read on several counts.

The cover of Working for Victory is the well known work by Dame Laura Knight  titled ‘Ruby Loftus Screwing a Breech Ring’ commissioned by the War Artists Advisory Committee during WW2 as a boost for morale amongst factory workers enduring long, gruelling hours on the factory floor. It is generally viewed as the UK equivalent of the USA’s ‘Rosie the Riveter’. A well-researched novel by Clare Harvey called The Night Raid was woven around the painting of that piece.