The Mammoth Book of Folk Horror is edited by the inimitable maestro of horror anthologies, Mr Stephen Jones! It also includes photographs by the ever-youthful Michael Marshall Smith.
I am really excited and proud to be included in this all-star contents list. I’ve always loved horror tales that work around myths and legends, even if some of those are urban myths, and ‘The Devil’s Piss Pot’, my contribution to The Mammoth Book of Folk Horror draws on several folk tales of the Sussex landscape though present day eyes. 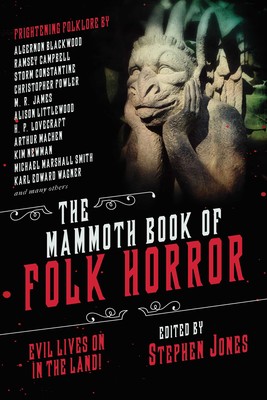 The Mammoth Book of Folk Horror contents:
THE WHITE PEOPLE – Arthur Machen
JENNY GREENTEETH – Alison Littlewood
ALL I EVER SEE – Mike Chinn
WAILING WELL – M. R. James
THE OFFERING – Michael Marshall Smith
ST. AMBREWS WELL – David A. Sutton
STICKS – Karl Edward Wagner
GRAVEDIRT MOUTH – Maura McHugh
GAVIN’S FIELD – Steve Rasnic Tem
THE HOUND – H. P. Lovecraft
THE KING OF STONES – Simon Strantzas
THE DEVIL’S PISS POT – Jan Edwards
THE MISTAKE AT THE MONSOON PALACE – Christopher Fowler
WYFA MEDJ – Storm Constantine
THE DARK COUNTRY – Dennis Etchison
ANCIENT LIGHTS – Algernon Blackwood
PORSON’S PIECE – Reggie Oliver
THE FOURTH CALL – Ramsey Campbell
THE GYPSIES IN THE WOOD – Kim Newman
Read it, enjoy it!
The Mammoth Book of Folk Horror is another title that was covid-delayed  but it has burst onto the real and virtual shelves this week on Amazon.com .   Amazon.co.uk still list 14th October which was the original date, but that seems to be a typo as I have not heard of anyone having troubles ordering it – so go and buy it now!
“THE MAMMOTH BOOK OF FOLK HORROR, as the title may suggest, contains an enormous amount of stories . . . it is fantastic to see the many interpretations of folk horror, and how it existed long before the term was officially coined. An essential collection for anyone with a remote interest in the naturally terrifying.”
—CALIFORNIA READING