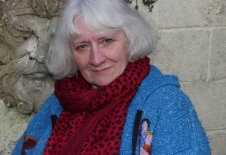 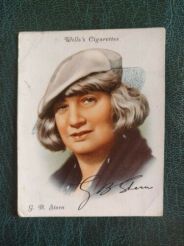 There is a theory that we all have a doppelganger. Or at very least have someone to whom we are strikingly similar. I tease a horror writing friend of mine because he does bear a marked resemblance to Cesare Borgia, and as a writer of dark fiction he finds it rather amusing.

Fellow fantasy writer, KT Davies,  recently posted a picture of the author G B Stern on my timeline and asked if there was something I was not telling people in regard to my apparent immortality…

She had found a Wills Cigarettes ‘Famous British Authors’ series card, which came out in the 1930s, and yes,  in that tiny watercolour, Ms Stern does bear an uncanny resemblance to me, though looking at other pictures of her the similarity is less obvious. Is she my doppelganger? Comments? 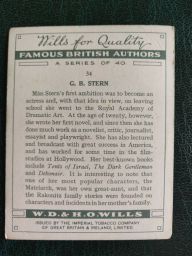 A quick google provided a potted biography: Gladys Bronwen Stern (born Gladys Bertha Stern) 17 June 1890 – 20 September 1973. Writer and journalist. Gladys studied at the R.A.D.A. with every intention of becoming an actress but soon found her forte as a writer in her early twenties. She went on to pen some seventy plus books, mostly novels but also biographies and books of essays, plus five  plays and several dozen short stories. Her most famous books were The Matriarch series, which concerned the Rakonitz and Czelovar families. These books were based on her own cosmopolitan Jewish family who left Eastern Europe and came to settle in England. She was reputed to be a little fierce and slightly eccentric woman, but was held in high regard as a writer by her contemporaries, including W Somerset Maugham.

I have not read any of her work but now that my interest is peaked I shall look for a copy of the Matriarch at very least.