Clearing for Reiki and for Me. #reiki 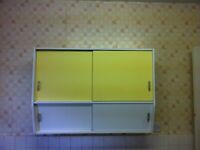 Yesterday morning Peter went into the garage yesterday to fetch some boxes that needs to go to the tip, and on getting the boxes out knocked an ancient cupboard left by our predecessors. Said cupboard was only held up by three small screws as it turned out and the wood itself was dried and weakened with woodworm. It fell from the wall. (Not the one pictured here but very like it.)

Feverish activity ensued as we picked up all of the gubbins that had been in the cabinet and then broke up and disposed of the worm riddled wood. That done we had a mass of ‘stuff’ that needed a home. Cleaning fluids, wood glues, plant foods etc.  Now we have had some open Ikea shelving, which had been in the shed at our old house, slotted into the roof cavity of the garage since we moved in here and it seemed like a good time to set to and assemble them to take the place of that worm-ridden old kitchen unit.  As always these things take far longer than you’d think, and it was four p.m. by the time we had everything stowed away.

But what, I hear you ask, has that to do with Reiki? Not a great deal, other than in clearing that dark corner I also unearthed my old treatment couch that has sat buried beneath the junk all this time.

I have done some Reiki treatments since moving here,  mostly for friends, but without the couch. Unlike many therapies Reiki can be done anywhere so having that couch was never essential, but unearthing the couch does feel like a symbol of something reawakening.

Today I dragged the couch into the yard and took it from its case. I had feared the worse because the canvas case did look shabby, but once out and washed down I was really encouraged to find it was not ruined, as I had feared.

Yes it is fairly old, but that is not an issue for me. I abhor waste and object to our throwaway culture. It shall not be returned to the shed! There is a nice ”therapy couch sized’ space under the spare bed, and once the couch is dry and returned to its carrying case it shall go there!

Finding the couch has been uplifting – and  given me the kick I needed to return to that path. Once Covid has passed us by I shall be re-energising my Reiki skills and opening up for business once more!