Everything has started shooting up and despite the old adage ‘ne’er cast a clout til May be out’ I have been busy getting various young plants into the allotment.

First and foremost are the tomatoes. Not having a greenhouse – and being in lockdown – we decided to get a tomato shelter for this year by mail order. We also bought some cloth pots so that I could get a good selection inside of it.  2 x Gardener’s Delight (red cherry variety) 2 x Lldi (yellow cherry) 2 x Roma (Plum tom), 2 x Tiger Stripe and (I think as they were given to me without a label) 2 x Moneymaker.

Then I have used the old greenhouse trenches to stand pots for  Patty Pan summer squashes and Butternut winter squashes. This is an effort to avoid slugs and make watering easier so we shall see how they progress.

And against the side of the shed – a sheltered and sunny spot – some outdoor cucumbers. Bit of a risk growing them outside. No matter that the packets say outdoor variety  always thrive better in a greenhouse – but worth a try. Always willing to experiment, and one successfully grown cue  is better than none! 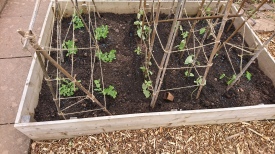 At the other end of the plot I have some Norli mange tout, Polka dwarf french beans (yellow variety) and a few climbing Blue Lake french beans.

I may do another later sowing of the Norli at some point as mange tout are a favourite of ours.

Also  (right) are the runner beans – Tenderstar variety. Probably far more there than needed but I was allowing for mollusc predation! I shall take a few out once they get going. 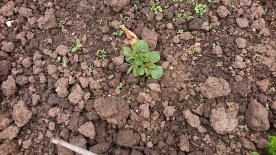 Planted a couple of weeks back now, the potatoes are just showing their heads so looking forward to those!

And the raised bed of alliums (leeks, red onions and garlic) are also going well.

Leek and potato soup if nothing else! 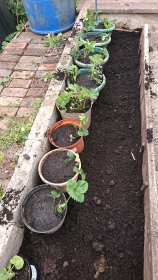 At the edge of the spud patch there were some strawberry runners left by the previous plot holder and in the spirit of waste not want not I used last year’s bottomless pots and the other greenhouse trench to create a raised strawberry bed – hopefully so that both those pesky molluscs can be kept at bay and any fruits will not be splashed by mud when watering. Keeping the blackbirds from the fruit will be a problem for next month!

The soil to the right of the pots will be hosting both Iceberg and ‘headed’ (frilly) lettuces. Yes I realise they will probably be pounced upon by those slugs but I can try…

In other parts the rhubarb has already provided many tasty desserts with many more to come.

See elsewhere on this blog for my recipe for rhubarb cobbler!

I still have sweetcorn and purple sprouting broccoli in pots ready to go out – but they can wait for a few days. (old piccy – those PSs are a lot bigger now and ready for the raised beds – I just need to construct some anti-pigeon defences before they are allowed out in open soil.) 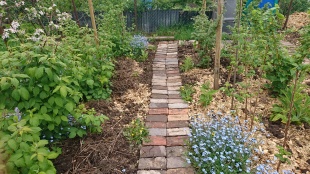 We also have the fruit beds. Peter has been laying down paths to make for easy picking and I have fruit cages at the ready for when the fruits have developed!

Lots of stable mulch around them both as fertiliser and weed suppressant! 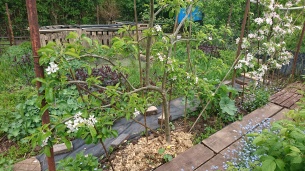 Last year both apple trees were a sorry sight. Not enough air around them, and in need of feeding, so I also cut back the Hymalayan nutmeg in the wildlife garden and we laid temporary paths on either side to suppress the weeds and applied more stable mulch to give them a fighting chance.  Plenty of blossom so I am hopeful.