Clearing the allotment decks has been slow this year. We started with such a wet winter and early spring that it was impossible to do much with the clay soil – and then came a total lack of water since Corona lockdown began. Yes we could get to the plot but the inability to get supplies held me back because I really wanted to put some more compost and topsoil in the raised beds…  As you may have read in previous posts Peter got the potatoes in last week, but the seedlings are overtaking my conservatory (Peppers (5 varieties) Tomatoes (4v) Lettuces (3v) Sweetcorn (2v) Broccoli, French Beans (2v) Runner Beans, mange tout – plus the bedding plants lobelia, cosmos, tagetes, petunias and dahlias. (not all shown – not enough room!) )so I shall need to plant some of them up soon!

Obviously the toms and peppers will be potted up into large pots for growing on.

The raised beds are now empty (apart from some leeks and a half row of parsnips) and awaiting new sowings, mostly of other root crops, which don’t get started off in trays, which I will do next week with luck.

As you can see they really could do with some added soil. I have some on order but we all know how hard it can be to get delivery slots these days!

The bean trench also needs some added compost but I may dress the surface later.

The other project going on at the allotment is the placing of brick paths around the fruit beds to make access easier. Another allotment holder had a surplus so we were able to make great inroads into that. 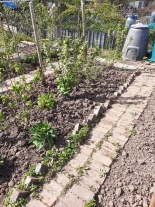 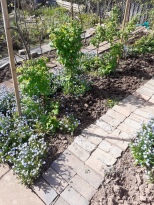 The other task for the fruit beds – which were new in last autumn – was to loosen the soil impacted by the torrents of rain that we’ve had over the winter, and also remove weeds at the same time. One of these paths was already in place (note weeds – whoever laid it didn’t use much membrane – or perhaps it has been there so long it has just rotted away – but it will stay down for now.  Yes we left in the forget-me-nots for the bees three allotments down. Next job there is to erect the netting frames, at least around the currants and gooseberries. But that can wait for a week or two.

With the drought there were huge cracks appearing in the surface and it was like breaking rock in places, and it all needs some additional composted matter around the roots, but otherwise really pleased with how it is coming along!