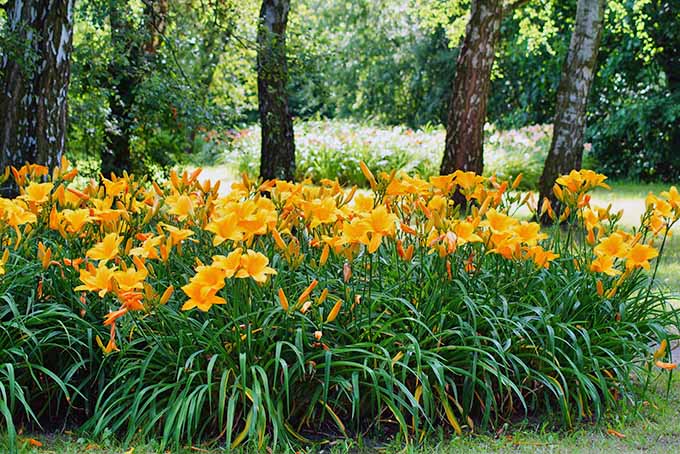 My first Courtyard Garden post of 2020 after a very wet and windy winter.

And leaving trays of seeds aside my first task  has been to dig out a huge chunk of Day Lilies. The flowers are a beautiful deep/dark yellow, almost veering into orange, and look spectacular in full bloom.  (Not my illo) One of the few plants left by my non-gardening predecessor. Oddly almost all of the plants left were toxic in some way – and she had four children which makes you wonder!

It made me quite sad to dig out such a gorgeous plant but one of my cats has taken to eating the leaves. Now we all know that lilies are toxic for cats and I have avoided lilies such as Star-gazers that produce a lot of pollen that cats might brush up against and ingest while cleaning themselves. But I have never had a cat eat the leaves before.

Oberon, it has to be said, is not the brightest button.  A lumbering 7kg package of bon homie who does odd things at times. I had noticed one of the felines had been ill a few times but had not identified which one – but today I caught Oberon in the act of chewing chunks from the newly emerging lily foliage and I had my culprit.

The only answer was to dig it up (the plant that is – not Oberon). For now the clump is residing in a large trug in the front garden (where the cats seldom go) while I decide what to do with it.

Update 20/03/20  Now gone to a good home -given the clump away to a friend.  I hate binning perfectly good plants 🙂