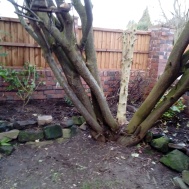 Regular readers of the Courtyard Garden will remember that some months ago we bought a Medlar tree, which we planted in a large pot whilst we sorted out its final spot.

You may also recall that we have a large cherry plum tree which we had trimmed last year but found that its split trunk was still taking up far more space than it warranted. This week we had the trunks on the right hand side taken down along with the remains of the holly (centre). 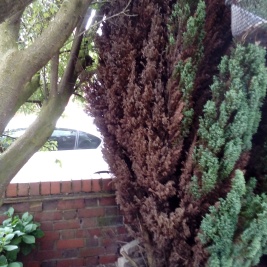 We also had two rather ugly cypresses trees. These had been truncated by the by the previous owners but were still very tall, despite the cherry plum leaning across them. They had also  begun to brown on one side.

Both of those have gone!

Peter rebuilt the stone edging to the border.  In went Medlar, plus Angel’s Fishing Rods and a clump of Day lilies and the corner is transformed!