(at least in Sussex where I hail from – and I make no apology for this) as the ‘Dog’s Arse’ tree. This doubtless because of the rather odd looking fruits, which do have a rather unfortunate formation.

Many will know the name from Romeo and Juliet  where Mercurio, on seeing Romeo jumping over the orchard wall, calls out : “Now will he sit under a medlar tree.” A bawdy sentiment in this context, but shows that the Medlar was a popular fruit in Elizabethan England. It was well known to Greeks and Romans and may stretch back 30 centuries as a cultivar.

The Medlar fell out of favour, in this country at least, in the 20th century, probably due to its unappealing look and also the fact that you need to let the fruit degrade to a soft state before it is edible.  From articles I have read since buying my tree, however, the Medlar seems tipped to make a big comeback this season. Odd then that it was not expensive, as is often the case when trees and shrubs are suddenly deemed fashionable, but perhaps I am just ahead of the curve 🙂

I bought it for the Courtyard because it is (so far) relatively unusual, and the variety that I have bought only

reaches 14ft, making it an ideal purchase for a small garden.  But then, realising that the two cypresses in the front garden are not that healthy, decided that it might be better there.  But… as always the plans made often go awry, and we have robins nesting in those fir trees, so plan two was hatched. I have a Ginkgo tree which is currently in a plastic pot. It used to stand by the front window but since having the new fences put up decided it was the ideal thing to replace the old and ailing Pieris that I have dug up. 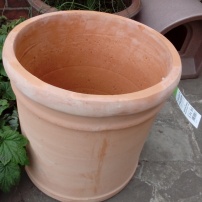 bought a pot for the Medlar on the grounds that when the cypresses are taken down in the autumn and the Medlar planted in their place I will have a beautiful ceramic pot for the Ginkgo. (Are you still with me?)

The pot is a heavy one being some 48cm high but that is needed to accommodate the tree and stop is blowing over as there is often a stiffish breeze blowing down the side of the house.

Trouble is, now that I have my Medlar tree potted up, I rather like it where it is. It adds height to the courtyard garden and balances up the fig tree at the other end of the border.

These trees are often found as venerable giants in Manor House gardens, and one such is destined to appear in the grounds of Perringham House  All the Things You Were – the current Bunch Courtney Investigates work in progress. 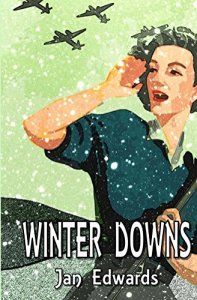