We have been waging war against ivy ever since we moved in and have (we hope) finally rooted out the last source of rampant tendrils.

When we moved in it was a monster that covered 4 x 6ft wide panels and towered almost 3ft above them in places in a tangle of woody vines. It was gradually pulling down both the panels and their supporting brick piers and encroaching on the border  by a good 2 ft in places! It is true that birds like the berries, and insects the winter pollen, but birds not use it for nesting (we found no old nests when we cut it down), and its benefits were far outweighing its problems by some large amount. 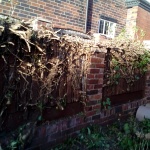 fence panels falling out – it took 4 car loads (back seat down and crammed to the roof.) The panels had been replaced and all but one of the roots grubbed out.

Yesterday Peter finally vanquished this ancient behemoth!  I don’t think I have ever seen such a monster ivy root!  It was too large to fit into the council Green Waste recycling wheelie-bin – but was ceremonially escorted to the tip this morning and consigned to a new life as compost. 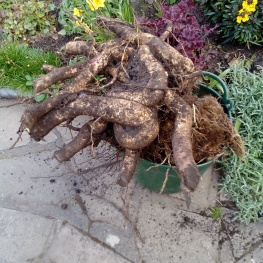 Now that it has been removed we can tackle that sunny border free of its green-tentacled thug. The upended root’s resemblance to some Cthulhoid monster did not escape our notice!