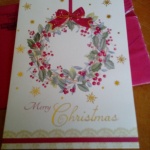 No… wait… something is wrong here…

Just received a Christmas card and though I know the sender to be notoriously organised but not even SHE sends out her seasonal missives 10 months early!

So well done  the Royal Mail! Only delivered 10 weeks after posting.

The card was was correctly addressed, in a very clear hand, using the correct postal code.  So not sent to the wrong address as the missive claims. (Though it was apparently delivered somewhere obscure and nowhere near the postal code used)

So these are the things that I ask myself.  Why was it directed via Southampton? Why has it taken almost three months to reach me – and why is the card over-stamped as Second Class post despite having a First Class stamp?

These are questions that may never be answered – but a Christmas card on a chilly February morning is not an unpleasant thing. It made me smile 🙂