I have seen the same debate going on in many corners of t’internet over the date on when it is permissible to begin the raising of Christmas decorations.

The commonly held tradition was always that the best luck for the coming year came from leaving decorations in the home until Festival of Light on 13th December (St Lucia’s Day) and to take them down no later than 12th night (6th Jan).

Of course this did not apply to schools and shops, but by and large it seemed to be something that people stuck with.

I recall that this was never something to be questioned in our house at least. My mother was an absolute  stickler for this – claiming that she could not stand the dust and kerfuffle for any longer than 3 weeks. In reality she was deeply superstitious though that was some thing she would deny vociferously if so accused. 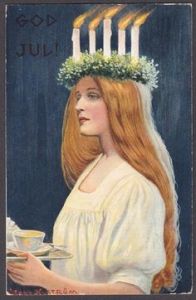 The St Lucia custom is, as most of you know, Scandinavian. The religious/saintly version of her legend is that St Lucy, a third century Swedish martyr, took food and aid to persecuted Christians hiding in the catacombs, using a candle-lit wreath to light her way and leave her hands free to carry as much food as possible.

Now as St Lucia’s day is 13th December and was said to originally coincide with the Winter Solstice,  so I have always wondered if the idea of her lights guiding the way to the season came here to the UK along with the pagan Yule/Christmas tree.

Possibly the Festival would originally have heralded the twelve days of plenty (yule). The gregorian shift probably accounts for the basic difference that exists between 13th – especially if you count from there to the modern solstice (21st December).

Only my theory of course – but come what may – my decorations will not go up before the 12th December!