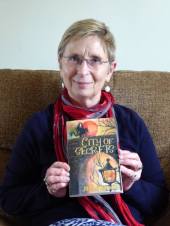 Misha Herwin is a writer of books for children and adults and lives in Staffordshire, in a house with a dragon in the garden. She has been writing for as long as she can remember and in her own words – has always been fascinated by the magical and supernatural, which makes this time of year, when the nights have drawn in, the pumpkins have been carved and ghosts summoned, or scared away, the perfect moment to launch City of Secrets, a fantasy adventure for 8-12 year olds.

Tell us about the City of Secrets
The Bristol of “City of Secrets” is a dark and sinister place. Making a living selling pies is not easy, but Letty Parker is a resourceful girl who has learned to tread her way carefully through areas ruled by rival gangs and to avoid the Barbary eels who lurk in shadowy corners. Her business is going well − until the street children, who are her friends and customers, start to go missing.

Letty is determined to find out what has happened to them and when the authorities prove less than helpful, for who cares about children who are poor, she gets together with her friends, Jebediah Hill, the leader of a gang of pickpockets, and the mysterious Gabriel and they hatch a plan…

What inspired you to write this series?
This is the first of the “Adventures of Letty Parker” and I’ve had great fun writing it. Bristol is a city I know well and love. I was brought up there and have used some of my favourite places, like The Christmas Steps, in the story. Transferring streets and terraces that really exist to my fantasy world is something I enjoy as I can build on what I know yet make it darker and scarier with a touch of sinister magic.  Which is not to say that the book is verges on horror. I would prefer to compare it to Philip Pullman’s “His Dark Materials”, where the children face dangers yet have, or will develop, the strength to overcome them.

City of Secrets is an adventure but are the character are equally important?
What I like about Letty Parker is her courage and independence. She might be scared, but she’ll do it anyway and not let any so called authority stand in her way. She comes from a line of great role models, Pippi Longstocking, Anne of Green Gables, the Chalet School Girls, Katniss Everdeen and Captain Nancy of “Swallows and Amazons” to name but a few.

We need more of these girls out there. Girls who are prepared to stand up for themselves, say what they think, yet at the same time have a keen sense of what is right and wrong and a fierce loyalty to their friends. This, I hope is the essence of the “Adventure of Letty Parker” series.

And it is not all about the girls. Letty’s friends Jebediah Hill, leader of a gang of pick-pockets, his side-kick, Mango and the mysterious half human, half Nephilim, Gabriel all play their parts.

They are all characters that simply could not be ignored.  My first view of Letty is at sunset on the wharf at the Bristol docks. “A dark tangle of masts and rigging was etched against the sky and the setting sun stained the water red.” A faint breeze lifts the hair at the back of her neck…

From that moment she was fully formed. The plot came next and needed refining and working on. Next came a great deal of editing and then, finally, Letty Parker was ready to go out into the world.

If you want to know more about her adventures then “City of Secrets” is available in paperback and e book at links below.