Winking Man – story for the season 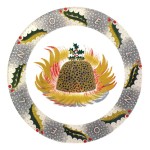 Movement out there in the garden broke Kira’s reverie. Two ravens down from the high peaks bounced among the spindly branches of the apple tree and pecking at a woefully small sprouting of mistletoe. They croaked their displeasure into the cold air and flapped lazily to the top of the shed. A few feet below them several rabbits were hunched over the parsnip greens, their frantic mouths inhaling leaves with almost mechanical efficiency, only pausing momentarily as the hiker came into view.

He paused near the stables and seated himself on the stone mounting block with only a glance toward the hostel doors. Laying his battered rucksack and wooden stave on the grass beside him he slaked his thirst from a water bottle.

Kira watched him through the kitchen window, whilst still washing up after the previous night’s hostellers. She wondered if her peace was about to be disturbed. This was her job but she’d be lying if she claimed not to prefer the place to herself.

He was pleasing enough to look at – from what she could see at such a distance. Ex-military in bearing, despite a snowy pig-tail dangling between his shoulder blades. She knew his type. Old-timers yomping over the hills with ferocious intensity, testing themselves against weather, hills and inner demons.

She emptied the bowl and watched the water swirl out of sight, poking at small hunks of detritus to hurry them into the void. When she looked up once more the garden was empty. Man, rodents and corvids had all deserted her.

That didn’t sadden her in the least. Isolation was the reason she had taken a resident caretaker gig. She’d need to make the most of it. Come Friday the place would be heaving with hikers spending the pre-Christmas weekend wandering the hills in lieu of shopping. Mostly twenty-somethings possessed of the energy and freedom to indulge themselves in the run up to excess. Kira was retired, yet had much more in common with those free spirits than with her peers. Not that she had much family left, and few friends in her homeland after years of chasing the news across the globe with camera and notebook.

She wiped her hands, scanning the garden for signs of life. Not so much as a robin, which was odd when the bird feeders were usually awash with finches in the winter months.

She looked toward the Winking Man ridge, picked out against a pinking horizon and her shutter finger itched for action. She never tired of recording the phenomenon that had given the peak its name. The final rays of evening light seared through a natural embrasure over the three days of winter solstice; snapping open and closed as you approached.

She threw down her cloth and grabbing camera and coat, hurried out into the rosy light; taking the well trodden Winking Man trail. On the final stretch she stepped aside to catch the final few blinkings – and her boot slipped between boulders.

Her flayling hands grasped nothing more substantial than the breeze and she fell toward the drop-off with gut churning certainty.

A hand clamped hold of her arm, and halted her chaos mid swirl. Her line of vision was filled with the face of her hiker. A peaceable face, despite the puckered depression where his right eye should be.

Their short descent was taken in a silence broken only by the cawing of two black birds.