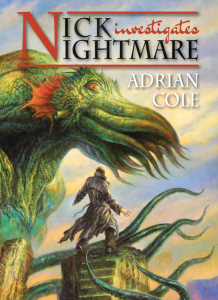 Adrian Cole is born and bred Devonian, living on the North Devon coast with his wife, Jude. Adrian’s first works began to appear in magazines in the mid 70s. Most were centred around his eternal warrior, The Voidal character. In recent years he has taken up the role of Nick Nightmare, a gumshoe PI in the style of Philip Marlow who battles against Dagon, Cthulhu and all their evil minions! Fiction very much in the pulp style told with great style and humour. The Nick Nightmare stories have been collected into one volume titles Nick Nightmare Investigates, available HERE from The Alchemy Press.

Adrian, how long have you been writing and how did you get started?
Nearly 40 years. First stuff was hand written in old school exercise books! Inspired by LOTR, Dune, ERB, Dennis Wheatley and a few others. Worked in a library so had plenty of material.

What do you like to do when you’re not writing, and does it come in useful for your stories?
I’m a bit of a fresh air fiend – especially the beach/sea and the local forest lands, Dartmoor. Yes, great source of inspiration.

What is at the root of your current book/story?
Cannibalism.

Ebooks or Traditional?
Traditional, but I recognise the place for ebooks (and indeed, audio books)

What is the best piece of writing advice you’ve ever received?
“Get on with it.”

Is there any genre or style of writing you haven’t tried yet but would like to?
I’ve flirted with crime but would love to do more. I probably shall before long. (Write about it, that is.)

Name your superpower and why that one.
I refuse to answer on the grounds that it might incriminate me.

What’s the most important thing you have learned about writing?
My life is diminished if I don’t write.

What aspects of writing to do you find the most tricky?
Selling a million copies.

Do you have music playing when you write? What are your tracks of choice?
I prefer to work in as quiet an environment as possible. I love music but it distracts me when I’m working. Especially radio.

Romance: Pride and Prejudice or Fifty Shades?
P and P. Haven’t read Fifty Shades, but it sounds like a lot of tosh.

Which of your previous works are you most proud of, and are there any that you would like to forget about?
Especially fond of Moorstones, Night Of The Heroes and Nick Nightmare Investigates. The one to forget is The Crimson Talisman, done for the war-gaming publishers, Wizards of West Coast.

Who has been your favourite character from your book/series and why?
Toss up between Elfloq (the Voidal’s familiar) and Nick Nightmare – probably Nick.

Do you have a typical writing day?
I write all morning. Afternoon is usually spent doing something to the house, or off swimming (in warmer months!) They allow me lots of “thinking” time.

Do you have any particular preparations for warming up the writer-brain, or get stuck straight in?
Usually spend up to an hour in bed, drinking coffee and going over the next bit of the story in my head before leaping up and converting it all to mss.

Who would play you in your biopic?
Someone who was desperate for the money

If you could have dinner with any writer in your field (past of present) who would it be and why?
Henry Rider Haggard. He had a fabulously interesting life at an intriguing time in British history. Otherwise it would be Edgar Rice Burroughs, who also had an amazing life – one of real contrasts.

What was the first genre story you read and what kind of impact did it make on you?
It was either Tarzan Of The Apes  or War Of The Worlds. Both blew me away.

Have you ever included people you know (disguised or not) in your fiction?
Not intentionally.

Fantasy: Lord Of The Rings or Howl’s Moving Castle?
I love both.

What are you currently reading?
This questionnaire, otherwise The Casebook Of Victor Frankenstein (Peter Ackroyd), Waterloo (Bernard Cornwell) and Dark Detectives (Edited by Stephen Jones)

Who are some of your favourite authors and what is it about their work that appeals?
J G Ballard stands out.

Comic: Batman or Fables?
Don’t know Fables – I like “X” best of the current crop.

Who would star in the film?
Brendan Gleeson would play Nick Nightmare in the absence of Robert Mitchum (thanks to my wife, Jude’s suggestion)

What/when was the first piece of fiction you wrote? And what happened to it? (Be honest now!)
When I was about ten years old I wrote an unfinished pastiche of Black Beauty. Sad to say I didn’t keep it. First published piece was a short (ghost) story for an IPC magazine called Destiny (which ran for a whole #1 issue!)

Conventions: when and where.
Attended Fantasycon for its first 10 (?) years and some Eastercons and Novacons and the first World FCon in England. Only just started getting back into attending.

Oxford commas – discuss!
I’m old school and prefer the old style of punctuation. BUT some stories have to be written differently – eg 1st person narratives need to take into account how people would speak/write. Flexibility.

What are you up to next?
Working on several short horror yarns, including new Nick Nightmare material. Bound to attend conventions at some point this year. Random fun – visiting Plymouth Argyle, beach (not quite warm enough to go in the sea yet, given that I eschew wetsuits) – loads of films, tv, comics, books, etc.

In this frenetic collection of stories taken from the files of Nick Nightmare, Private Eye, the intrepid pulp hero is thrown into a murky world of crawling horrors, spawned by the Old Ones as they seek to rise up from their primordial oceanic depths, ‘when the stars are right.’ Whether he is shooting it out with power-crazed acolytes in his native New York, or slipping across into other dimensions to battle the spreading plague of invasion, Nightmare is never far from the long, clammy reach of the things from the Deep, bizarre artefacts  of power, decrepit villages and citadels, magic and voodoo. Life for the private eye is an endless slalom of mayhem.

Joining Nightmare are a host of weird characters, from the Sleaze Sisters, to Sharkbait Bill; the ageing but still potent superhero team, Vengeance Unlimited; and the extraordinary Monitifellini and his Magic Bus. There are the devious depravities of the Vogue Prince, the Bang Gang, and the frightful Spiderhead, to name but a few.