Today we have writer of futuristic fiction, EJ Swift, as our Quest Writer, author of The Osiris Project, a speculative fiction trilogy published by Del Rey UK and Night Shade Books.
EJ Swift  is a skilled trapeze artist who has completed an MA in Creative Writing, her first book being picked up by an agent at just 18. She loves to find unusual ways to exercise and finds that the trapeze also doubles up as a great way to get rid of writer’s block. More information on EJ Swift can be found on her website.

As a bonus we can offer 3 copies of Tamaruq as a giveaway! Just send me your email address via my contacts page. 3 entries will be drawn at random on 1st March.

Tell us a little about yourself and your writing.
I’m the author of The Osiris Project (Osiris, Cataveiro, and Tamaruq), a speculative fiction trilogy set in a world radically altered by climate change. Novel-writing is my first love, but I’ve also written short fiction for Interzone magazine, NewCon Press and Jurassic London. I live and work in London and like so many writers I’m a slave to two very lazy cats.

How long have you been writing and how did you get started?
I’ve written stories since I can remember, so it’s always been a part of my life. I wrote my first novel when I was eighteen – it’s in a trunk now, long-abandoned, and best left that way. Since then it’s been a long road of experimenting with various projects until I wrote Osiris, the first volume in The Osiris Project trilogy. In a strange twist of fate, I heard the news that my first story was to be published in Interzone just a week before I was offered a contract for Osiris. Suffice to say it was an exciting week!

What do you like to do when you’re not writing, and does it come in useful for your stories?
I have a long-standing love of dance and more recently I’ve got into contemporary circus arts. I’ve taken pole fitness classes for several years now, and I love its combination of dance and gymnastics, strength and grace. I’ve also tried flying trapeze and at the moment I’m taking classes in aerial hoop. Writing demands a lot of time and emotional investment, so having something that takes my mind off everything is invaluable. I’d love to write something circus-related at some point, too.

What is at the root of your current book/story?
Tamaruq is the conclusion of The Osiris Project. Book One, Osiris, is set in a divided ocean city whose inhabitants believe they are the last on earth. Cataveiro expands to the world outside, where Osiris is believed lost, and has become a kind of myth or legend, a source of stories to scare children. Tamaruq brings together characters and storylines from both books: Osiris has become a pawn in the ongoing tensions between the Boreal States of the north and Antarctica in the south, and everyone is caught up in the fallout.

Ebooks or Traditional?
I read both, but I prefer to buy traditional print as I like to have things on the bookshelves for reference – and I just love the look and feel of a physical book. If it’s a 1000-page tome I tend to buy the ebook, and my Kindle is brilliant for reading my own work in its various draft stages. It gives you a different perspective to seeing it on the computer screen.

What is the best piece of writing advice you’ve ever received?
When stuck, do badly.

Is there any genre or style of writing you haven’t tried yet but would like to?
I wrote a short story called “Saga’s Children” for The Lowest Heaven anthology (Jurassic), which was set a few hundred years in the future, at a point where civilization is beginning to expand into the Solar System. I would love to go back to that world and set a novel there.

Who has been your favourite character from your book/series and why?
I’ve really enjoyed writing the Alaskan, who shows up first in Cataveiro. She starts out as an ostensible villain, an outcast from her own society, scheming from an attic bed in the rough part of town. This is in itself was fun to write, but the interesting part was exploring and revealing details of her background over the course of the narrative. I also liked developing the interplay between her and her employee, Mig, and the shifting power dynamics within that relationship.

What are you currently reading?
I’ve just finished Genevieve Valentine’s Mechanique, a steampunk circus novel, gorgeously written and cleverly structured, which I adored. I’m really looking forward to her new novel Persona which comes out later this year – it’s billed as SF/thriller and is surely one to watch.

I’m now reading Nick Harkaway’s Angelmaker and that’s shaping up to be as witty, thoughtful and fun as his first novel The Gone-Away World, another favourite of mine.

Who are some of your favourite authors?
I’m a big fan of Margaret Atwood (The Blind Assassin is one of my favourite novels) and I adore Jennifer Egan’s work. I’d recommend A Visit From The Goon Squad to anyone. She’s one of those rare authors who can go from comedy to tragedy within a sentence – a writer to aspire to. 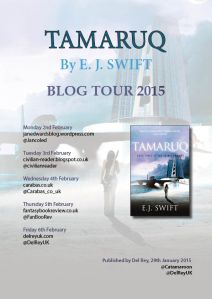 Book One, Osiris, is set in a future ocean metropolis, a failed utopia whose inhabitants believe they live on the last city on earth. The second book, Cataveiro, is set in South America, and expands the series to explore the world beyond Osiris. The series concludes with Tamaruq.

Tamaruq:  On the island of Osiris, ex-socialite and founding family member Adelaide Rechnov is positive that the government in the Eastern quarter is keeping secrets, and with the discovery of a long-unused radio signal asking the mainland for help, it is up to her to form the resistance. Why did the leaders decide to stop reaching out? Meanwhile, the awareness of the much-fabled island is spreading on the mainland. And many are heading to the ‘lost city’ with their own devious objectives…