Last things first – for those of you who may not have heard the news – Peter Coleborn The Alchemy Press and won the British Fantasy Award for Best Small Press 2014!!! Yah! (sounds of whistles, bells and much cheering) We really were not expecting that so it made an exciting end to the weekend. None of us at Coleborn Manor expected it when we were up against such people as Fox Spirit Books (Adele Wearing), NewCon Press (Ian Whates) and Spectral Press (Simon Marshall-Jones) – any of whom would have been worthy winners! Huge thanks to those who nominated The Alchemy Press and to the judges. We are humbled! Congratulations also to all of BFA winners in 2014.

But … that was the last part of the convention! Before that came what has been our focus for several months; The Alchemy Press book launch, where we set five titles loose on an unsuspecting public.

Nick Nightmare Investigates by Adrian Cole (with additional material by Mike Chinn)
and Merry-Go-Round and Other Stories Other Words by Bryn Fortey.

The launch went off very well, with so many Alchemy Press authors there we had to ask for more signing tables! Present and signing were (in no particular order): Peter Coleborn, Jan Edwards, Jenny Barber, Mike Chinn, Dean Drinkel, Adria 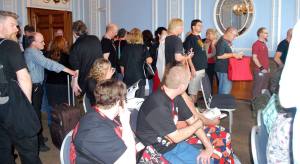 n Cole, Bryn Fortey, Sarah Ash, K T Davies, James Brogden, Carl Barker, Pauline Dungate, Andrew Coulthard, Marion Pitman, Peter Mark May, Paul Woodward, Allen Ashley and Les Edwards. (If I have missed anyone off my profuse apologies – it was a manic hour!) Huge thanks to all who contributed their excellent stories and artwork!

Being so soon after lunch the ‘Cookies and Coffee’ refreshments, rather than wine, seemed to go down well with our readers and all was good. All of my hours spent making and icing were all worth the while.

I personally saw very little of the convention, being chained to the Alchemy Press book tables as I was, but the world and most of the convention passed through there at some point so I probably caught up with most folks at some point. We also shared table space with the amazing Shadow Publishing, run by Dave Sutton. And had additional titles from Newcon Press  and Pigeon Park Press

Peter and I had hired a van to bring the Alchemy Press stock, and added many, many books lurking in our shed which I sold at very reduced prices. Hard work but fun!

For the Joel Lane tribute on Friday evening, I had been asked to read something to the gathering and chose his poem ‘Outer District’, which first appeared in Chills #8, edited by Peter Coleborn for the BFS in 1994. It was a moving hour of readings and anecdotes.

Sadly I had to move my own reading slot to accommodate that as they took place at the same time, meaning that my slot at 10am on Saturday had a somewhat limited audience as nobody knew it was happening – but c’est la vie…

Evenings were taken up with meals with friends. A curry on Friday night and chinese banquet on Saturday, both of which went on so long (midnight) that we didn’t get back to the Con hotel. Always good to share a meal with good friends. A good time had by all.

So that was my Fantasycon 2014! Back home now, tired but happy! Thanks to Lee and the Fcon team for a good weekend.

Keep and eye out for the author Q&As being posted on the Alchemy Press site at http://alchemypress.wordpress.com/ and if you have not already done so sign up for the monthly AP newsletter for news on forthcoming titles. We have plans for Urban Mythic 3 and Pulp Heroes 4, and there may be a third anthology in offing. There are also several very exciting collections to be unveiled in the coming year! Get the news whilst it is hot!

See you all at Novacon in Nottingham in November 2014!